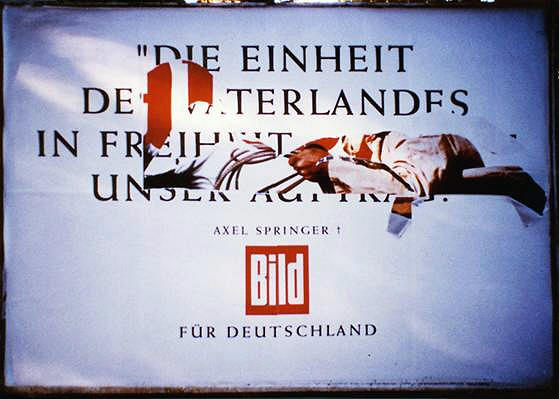 Berlin Park, Martha Rosler presents a photograph she took in 1990 Berlin. Captured in a leafy area at twilight, it features a billboard, partially defaced, engaging the methods of mediation for which the artist is well known – collage and appropriation – but enacted here via a found gesture of destruction. Rosler, who often employs the language of consumer goods and mass media to highlight historic axes of conflict, offers this image to highlight the fragility of territorial representation. With “Berlin Park,” she has captured an instance of this operation in the chance superimposition of two forms of interpretational authority: a quotation – a solemn show of patriotism (and GDR-era rhetoric) by German newspaper magnate Axel Springer. Republished posthumously by his influential tabloid Bild, the message is a literal veneer beneath which far-reaching commercial interests loom: the Marlboro Man, the ur-icon of cancer-inducing “West products.” Lasso in hand, he bursts through the imperious remark of Springer, the right-wing publisher whose empire’s headquarters were sited at the division of the Bundesrepublik and the “Wild East” (then a popular term pointing to the shifting territorial claims, in particular the gentrification of the reunified Berlin whose beginning this picture marks). The simplistic calculation of scale = value that both ads manifest, albeit to very different ends, underlines the medium’s intrinsic characteristics: where a billboard is meant to be representational, it has here in Rosler’s hands, turned revealing.

Postal service series consists of a standard postcard in A6 format printed in 100 copies, sent to a mailing list of the artist, as an edition distributed for free.
Besides, an enlarged version of the same postcard is released in an edition of 25 + 5 A.P as the collector's edition.
The postcard version functions as an autonomous work as well as the annoucement for the collector's edition.